You are here: Home › Process 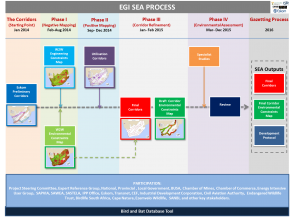 Preliminary Corridors are the starting point of the SEA. The corridors were identified by the Strategic Gird Planning Division of Eskom and are based on the results of a detailed Eskom Strategic Grid Plan Study. The study considered a number of possible future generation and load scenarios, and in so doing, identified the need for five national transmission infrastructure corridors to facilitate the balancing of South Africa’s electricity supply and demand needs up to 2040. The three scenarios considered were the Integrated Resource Plan 2030 base line scenario, an increased renewable scenario, replacing the nuclear component of the IRP with Concentrated Solar Power and battery storage capabilities and finally the increased imports scenario which assumed a doubling of electricity imports from neighbouring countries by 2030.  The five corridors identified satisfy any of the three scenario outcomes and any combination thereof.